Jimmy Keller passed away on April 3, 2009, at the age of 75. A very inspiring and moving eulogy given by his son Jim Keller is reprinted below:

For those that may not know me, I am Jim Keller, Jimmy's son. Mom, my sister Joyce, and my brother David and I would like to thank everyone for joining us today.

This last phase of Dad's life has been a difficult road. But there were many blessings after his stroke, and I especially want to thank two of those blessings, his care givers, Candi Moses and Topsie Jackson, for making that road much easier for Dad and our whole family.

These ladies went way beyond their mission and helped him get as much quality of life as possible. When he became wheelchair bound they literally wore the tires off his wheelchair going through the neighborhood. He enjoyed it very much. There was so much they did for him.

We also want to thank all of our neighbors and friends that have helped him. The LaComb's, Tommy, Caroline and fireman Chris, were always there when needed. So many others kept us in their prayers and we appreciate it very much!

And thank you Father Francis for not only your service here today, but also for the years of consoling and ministering to Jimmy. You have been a good and faithful servant in the name of our Lord and Savior.

Those of you who knew my dad before his stroke, know that he was a very loving man, quick to hug anyone and everyone. In return, he was also very easy to love.

But, living with him could well be something else, anything from high adventure to a near religious experience could be expected, mainly because he usually went over and through the mountains or other obstacles in his way rather than going around them. Always courageous and always confident in his abilities to do what he set out to do.

For the first phase of his life, the normal life if you will, although normal was a relative term with him. he was raised in Baton Rouge by devout Catholic parents, Guy and Bea. He was an athlete in his younger days-football, baseball, boxing. He graduated from Catholic High and LSU, high in his class, married his high school sweetheart, our mother Louise, served in the navy, and had four children.

Of all of life's ups and downs, the loss of a child, my brother Dale at age 5, did leave some scars.

He was happiest when bass fishing with a fly rod in the company of a family fishing legend, our Uncle Irving.

Then in 1968 a life changing illness set in motion the beginnings of a very unlikely story. This phase of his life was a thirty plus year odyssey. At age 34, Jimmy was diagnosed with Melanoma and had a radical surgery on his head and neck. Within a few months the cancer had returned. Now, the survival rate for melanoma in 1969 was slim. Once it spread the survival rate was zero.

After despair, depression and disfigurement, and only at the insistence of his parents (who were constantly praying for his healing) he traveled to a clinic in Dallas and started on Dr. Hoxey's herbal based treatment. While he said he did not believe it would work, he took it because of his parents. After some months, and seeing the lumps in his neck go away, and feeling better, he realized he might live-and he did! Then the authorities shut down the clinic in Dallas. He no longer had access to treatment that was healing him. He couldn't believe it or understand why.

That's when he decided he would search out all the information on alternative treatments for himself, and for people who were now coming to him and wanting to know what he had done to get better.

He traveled and studied and sought out everything he could learn about cancer and alternative treatments, seminars, conventions, doctors using different methods, and checking out many things from all around the world. He started studying how nutrition affected cancer and cancer prevention. Although we are now barraged by how diet relates to cancer, at that time conventional approaches showed no correlation.

He decided to help anyone with cancer, especially terminal people like he had been, to get any and every type of treatment he could get his hands on. Many of these treatments were used in other parts of the world, but not approved in the United States. He started out working with doctors and nurses but when they were not available he learned to administer the treatments himself.

As more and more people heard of him and some terminal patients survived, word spread of his story and theirs. Of course, many people were too far gone for anyone to help. Some would still want to be treated and he would do as much as he could.

Now, this was totally public in Baton Rouge. He wanted everyone to know his story, and he was exuberant when he shared it!

He was going on the radio talk shows and speaking to any and every group or organization that would have him. The Baton Rouge newspaper ran a large article on him with pictures of people being treated and they interviewed him about his survival story.

He testified before the committees of three state legislatures for the legalization of laetrile as a cancer treatment. All three states passed those bills. But, all the publicity proved to be too much and he was sued by the AMA to cease and desist.

He moved to Mexico and opened a clinic where other similar clinics were starting to open and using treatments not approved in the United States. But his trials and tribulations were just beginning.

I won't be able to tell the entire story here, but Ellen Brown, in her book "Forbidden Medicine", captures his journey. I encourage all of you to read it. Especially his grandchildren and great-grandchildren, to learn a side of your grandfather that you need to know about.

There are many letters in the back of Ellen's book. One written by John McComber says this, " I say in all truth that I owe my life to him. My treatment at St. Jude's caused my tumor to disappear. To this day I am free of any cancer in my body. Jimmy is a caring, loving, and spiritual man."

Another, by Arlene Torgesen of Soda Springs, Idaho says, "I had been diagnosed two different times and after chemo and radiation as then having only three months to live. (Now) I am known in this area as a medical miracle. I'm not a medical miracle, but a Jimmy Keller miracle.

Another, by Gloria Tinney of Santa Monica, CA says, "I had cancer of the lymph glands. Jimmy helped me out of my darkest hour. That was a year and a half ago. He treats patients even if they cannot afford it, myself included. "She went on later to be a radio talk show host in Los Angeles.

Another, written by the Reverand Karen Paris of North Hollywood, CA says, "I met Jimmy Keller after being diagnosed as having cervical carcinoma. I had not been able to work because of the cancer, did not have medical insurance, and lived alone. Jimmy took me as a patient anyway. I believe I would not be alive today if not for Jimmy Keller and the treatment he so lovingly gave me."

Dan Foster of CA wrote, ".at the end of treatment he would give a hug and say "God Bless You"

Sally Greer of Orange County said, "Jimmy was not only instrumental in saving my life, he taught me how to live. He helped me spiritually and was the person who told me I could do anything I wanted to do.

And there is so much more to this story to be told; so many compassionate stories. Many people, such as Frank Couseneaux, President of the Cancer Control Society in San Diego, have told me my dad was a great man. To some he was just a Quack, which by the way, was a term he loved. One of his patients even had tee shirts made up with the logo, "Have you hugged your quack today?" They were a big hit at the clinic.

Well, I don't know how to measure greatness, but I know that if you could measure it by the love and compassion you show others, he measured up very well!! He simply had to help people when they called, often at his own peril.

Another Keller, Helen Keller, once wrote something I believe applies to Dad. She wrote, "So long as you can sweeten another's pain, life is not in vain." 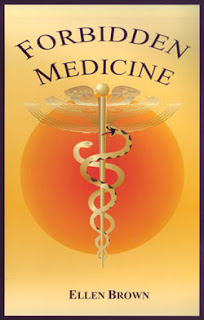